Bland is perfectly okay halfway into the 2021 U.S. Open

END_OF_DOCUMENT_TOKEN_TO_BE_REPLACED

Bland is perfectly okay halfway into the 2021 U.S. Open 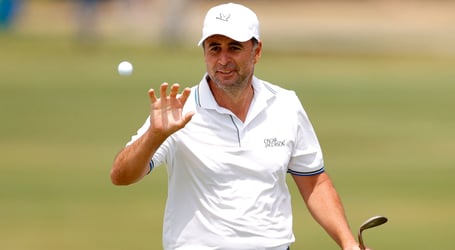 His last name is Bland, but Richard Bland (Titleist Pro V1) has been anything but that in the 2021 U.S. Open.

The 48-year-old walked off the course at Torrey Pines leading the pack at five-under.

So in a year in which there has been several surprises on the PGA Tour, the result so far of Bland is concurrent with the idea to expect the unexpected

Bland won the British Masters on May 15, recording his first European Title in his 478th tournament, becoming the oldest first-time victor and snapping his winless streak of 25 years. Imagine going that long without a win but still having the desire and competitive spirit to keep going!

And that earned him a trip to the U.S. Open, only his fourth major.

What a wonderful story.

Basically he must feel that everything that has happened since his first win is gravy.

How he manages to stay calm and collected for the final 36 holes will be interesting. The pin placements will be tricky, adding even more difficulty to the course which includes deep and thick roughs, but that’s typical for the U.S. Open.

There are so many players in the tournament half his age and with considerably more power and experience, but the fact he is even in this position is amazing. He’s playing with house money.

Louis Oosthuizen (Titleist Pro V1), a mere 10 years younger than Bland, is searching for his second major. He was rated highly going into the tournament, having a strong season that has included a tie for second to Mickelson in the PGA Championship.

He came into the tournament ranked 18th in the world and had made the cut in 14 of 15 tournaments, including 11 in a row.

As I write this, the players who began their second rounds in the afternoon are very much in contention, including Brooks Koepka (Titleist Pro V1x), aiming for his third U.S. Open. A week ago he couldn’t make the cut at the Palmetto Championship, but as we’ve come to understand he saves his best for the majors.

As for his verbal nemesis, reigning champion Bryson DeChambeau (Bridgestone Tour B X), he goes into the weekend at even par and you just know he will make things interesting and will show his emotion.

And how about Bubba Watson (Titleist Pro V1x), firing a four-under par round and going into the weekend at three-under? Bubba always makes it interesting.

It’s going to be really interesting and fun on the weekend, but I am conflicted. Sunday is Father’s Day and I’m going to be spending it with my kids, but I want to indulge and watch the U.S. Open all day. I figure once a year I’m allowed to do what I want and I hope my kids understand.

They know I’m a huge golf and the U.S. Open is must viewing.

Happy Father’s Day to all fathers!