Putting Became the Ultimate Story in the U.S. Open

END_OF_DOCUMENT_TOKEN_TO_BE_REPLACED

Putting Became the Ultimate Story in the U.S. Open 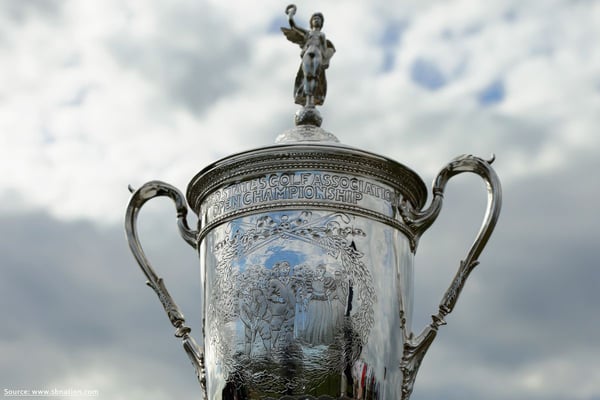 Drive for show and putt for dough is an old axiom in golf and never was it more true than in the 118th U.S. Open.

With greens that were as slick as glass, the players were left wondering trying to make putts, knowing that their balls could be hit perfectly and they would come up short or, even worse, go past the hole, pick up speed and go right off the green.

Dustin Johnson (TaylorMade TP5x), the world’s number-one ranked player, had the most problems of all because after playing confidently for the first 36 holes and going into the third round with a comfortable four-stroke lead, he came undone right from the first hole on Saturday. His problem for the final 36 holes became about how hard to hit his ball, and it became apparent he had either lost his confidence or seemed to be guessing, trying to figure out the line and his speed. He finished third at three-over par, two strokes behind defending champion Brooks Koepka (Titleist Pro V1x), who won by one shot over Tommy Fleetwood (Titleist Pro V1x).

For Johnson, it had become the complete opposite of the week before when he won the St. Jude Classic in Memphis by six strokes. There had never been a U.S. Open winner who had won the tournament the previous week and had been the world’s top-ranked player. Johnson was bucking history.

The U.S. Open at Shinnecock Hills in New York provided a significantly tougher challenge than the St. Jude Classic because of the competition, the course (in particular greens that were shaped like the bottom of a frying pan and didn’t hold the balls) and changing conditions due to varying weather. It provided extremes depending on the time of the day. It seemed the players who began play in the morning had a much more difficult task than those beginning playing in the afternoon, perhaps with the sun baking the greens in the absence of water.

And it could best be said the United States Golf Association, which always tries to make the U.S. Open arguably the toughest tournament on the PGA Tour, erred. Phil Mickelson (Callaway Chrome Soft X) predicted as much before the tournament started when he said the way the USGA sets up the course for the U.S. Open it’s a very fine line between testing players to the highest degree and making it carnival golf.

“The USGA (U.S. Golf Association) are doing the best they can to find that line, and a lot of times they do, and sometimes they cross over it,” Mickelson added. “You do all this prep work and then you are left to chance the outcome, as opposed to skill. That’s the problem I have with it.”

And he was bang-on about that, although he clearly crossed the line himself in Saturday’s play on the 13th hole when he hit a moving ball he had just putted, thereby deliberately breaking the rules and was assessed a two-stroke penalty. He decided that was the lesser of two evils rather than fruitlessly trying to put his way out of trouble. He ended up with a 10, six-over par, and laughed about it on way to the next hole. The USGA could have penalized him more severely by disqualifying from the tournament after the round, but a precedent had already been set when John Daly (Titleist Pro V1) did a similar egregious act in the 1999 U.S. Open.

Some critics said what Mickelson did, deliberately breaking the rules and then providing a flimsy apology, tarnished the game and set a bad example for younger golfers looking up to him as a role model. Others passed it off as nothing nearly that heinous given that the USGA underlined the problems he portended. Mickelson made par on the 13th hole on Sunday and rejoiced as if he’d won the tournament and threw the ball into the crowd.

Mickelson, who was celebrating his 48th birthday on the day that he made history for all the wrong reasons, is one of the great golfers of his era and has a legion of fans, most of whom will forgive him for his deliberate defiance of the rules.

The USGA admitted after the third round it had made a mistake setting up the course and promptly added some much-needed water to slow down the greens. So, in a way, Mickelson may have done something that goes against the rules of sportsmanship in golf, but maybe the USGA will not be as stubborn in setting up a course to make the best players in the world look like weekend duffers.

But really this all came down to one thing: putting. Koepka consistently made putts in the final 36 holes, including some with incredible saves. He came out of nowhere to win it last year, but wrist injuries plagued him this year. Now you have to think if he can stay healthy, he can be every bit as impactful as Justin Thomas (Titleist Pro V1x), Jordan Spieth (Titleist Pro V1x), Patrick Reed (Titleist Pro V1) and some of the other young guns on the PGA Tour. A new, young star has emerged as some of the 40-somethingsare winning less and less, while the 30-somethings are starting to feel increasing pressure.

Going into the tournament, I had predicted top-five finishes for Rickie Fowler (Titleist Pro V1) and Fleetwood, and suggested either one could win. Both players were in strong contention after the first 36 holes and both came undone on Saturday. Fowler shot an 84, 14-over par and Fleetwood eight-over par. Fowler rebounded on Sunday with a five-under par, but it was simply too much ground to close and he finished tied for 20th. Fleetwood shot a seven-under par 63, tying for the lowest round in tournament history. Had he made a short putt on the final hole for a birdie he would have posted a course-record 62 and a final score of one-over par.

Fleetwood watched helplessly from the clubhouse, knowing he had done all he could, but it was no longer in his hands. Koepka carded a two-under par 68 to win. He won it simply with his flat stick.

He also seems to have nerves of steel.

Fleetwood had to be happy he finished strongly. He came in the tournament ranked 12th in the world. I think it’s only a matter of time before the 27-year-old Englishman wins his first PGA tournament. He’s posted two runnerup finishes this year in 12 events, four top-10 finishes and has made the cut 11 of 12 times. Last year, he had one second in 10 events, three top-10 finishes and made the cut in eight of 10 tournaments.

He picks his spots and so far it seems to be working.