Lefty Is At It Again

END_OF_DOCUMENT_TOKEN_TO_BE_REPLACED

Lefty Is At It Again 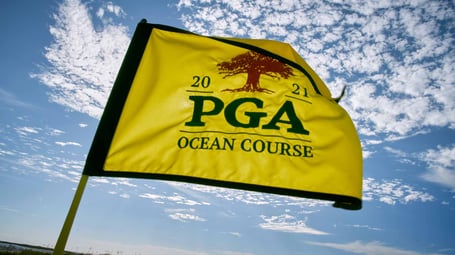 Phil Mickelson (Callaway Chrome Soft X) is very much in contention going into the weekend at five-under par in the PGA Championship that is bringing the best players to their knees. He finished his second round in first place after recording a three-under par. It was only a few weeks ago at the Wells Fargo tournament that Lefty had the lead after the opening round shooting a seven-under par 64. Well, he finished at seven-over par, shooting 14-over par in the final three rounds.

But, hey, if you are a fan of Phil, you don’t jump off the bandwagon. And if you recall, I wrote a few weeks ago that I’m part of a Phil Mickelson Facebook Fan Club. And we’re all giddy again.

You see, it’s not about what he does from week to week, but what the soon-to-be 51-year-old has done collectively in his career. It is the sum of the parts, not one single thing. He won the PGA Championship in 2005, and 16 years later he’s still battling. What does that say about his competitiveness and commitment?

Last week there was a story about the United States Golf Association granting Mickelson a special invitation to play at this year’s U.S. Open at Torrey Pines in San Diego, June 17-20. It means the San Diego native will be playing in his home town in the one tournament that has eluded him in his quest for personal grand slam. A runnerup six times, Mickelson will be the sentimental favorite to win the tournament, although what happens this weekend could make the invitation moot. With a solid finish, he’ll climb up the Official World Golf Ranking in which he is currently 115th. He needs to crack the top-60 no later than June 7 to earn a chance to play without an exemption. You’d have to think he would rather do it on merit.

What I found interesting is Mickelson accepting the invite given that he has been philosophically at odds for quite some time with the USGA because of the way it designs the U.S. Open, which he says often requires the players to do trick shots on the speedy greens.

But back to the PGA Championship: Whatever happens this week, the Phil Fans will salute him.

Do I think Phil will win it? Who knows? As they say, there is plenty of golf to be played and the pin placements and the wind should affect the outcome.

One thing is for sure: The guy with the ancient flat stick, the sunglasses, the chewing gum and the Workday golf shirt is rocking it!

And hopefully there’s some commercials during the broadcast of Phil giving advice to a guy buried in a bunker. Is that funny or what?

But if Lefty wins, I’m telling everyone they can call me that again.

One more Phil item: I run a fun golf pool and there are more than 40 entries for the PGA Championship. You pick four players and the foursome that collectively makes the most money wins. Not one person selected Mickelson.

WHAT WAS I THINKING: I thought Jordan Spieth (Titleist Pro V1x) was a lock. He’ll make the cut, but it’s going to take a miracle to win.

SPELL CHECK TIME: If South Africa’s Christiaan Bezuidenhout (Titleist Pro V1) wins – he’s currently in the mix at three-under par – there are going to be a lot of golf writers struggling to write his first and last names.

What’s interesting is Garcia switched to TaylorMade ahead of the tournament. He had been with TaylorMade for 15 years before switching to Callaway in January, 2018. He had been a “free agent” since January, 2020, saying he terminated the deal with Callaway because “it wasn’t the deal we thought.”

Garcia announced the return to TaylorMade on Tuesday, two days before the PGA Championship began.

“I’ve always been comfortable with their team, their approach to the game and their equipment, especially their TP5x golf ball. Happy to be back.”

OH CANADA: As a native of Canada, I was rooting for Corey Conners (Titleist Pro V1) after he led following the first round of the tournament at five-under, two ahead of the field. He stumbled on Friday with a three-over par, but is still in contention.